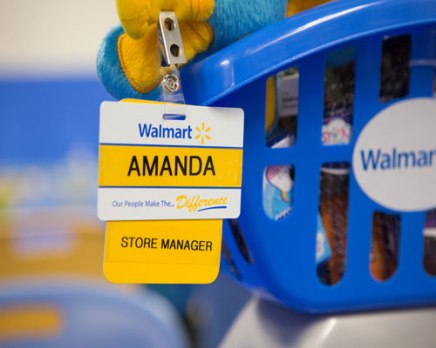 A few months ago, I asked my younger daughter, Amanda, about her birthday party. Without thinking, she answered: Walmart. I was very surprised, and I asked her how she would decorate a Walmart birthday party, and she said ‘with the yellow star mommy’.  Months went by and her birthday quickly approached. Then I asked her once again the same question, and to my surprise her answer did not change. ‘My party will be decorated like Walmart, this is because you should decorate your parties like your favorite things, and mine is Walmart!’ she said. She insisted on having a Walmart piñata, cake, and arty favors related to Walmart too. At that moment I knew there was no way I would convince her to change her mind, so I began thinking creatively tomato the most of this opportunity. As the days went by, my friends gave me some suggestions about party décor and activities. Another friend, an expert on blogs and my mentor, suggested to write to Walmart: ‘the worse they can say is no!’. My first thought was: ‘Why would a business like Walmart help me with my daughter’s birthday party?’ but then I remembered someone telling me that big stores like it when people approach them and suggest unique ideas. So, I decided to contact them and share my blogger mom story to see if Amanda’s dream of having a Walmart-themed party came true.

To my surprise, Walmart’s response was almost automatic. Adriana Pereira, Director of community relations responded in a very joyful and pleasantly surprise manner. She was extremely happy about the idea! Immediately she suggested of having Amanda’s party at a Walmart store, after all, this was the first time in Walmart’s history that a fan requested a birthday party about Walmart.

So we started to plan Amanda’s dream party, who with just 3 years of age knew exactly what she wanted. 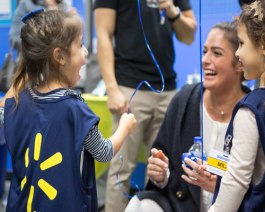 The day finally arrived, the day everyone was anxiously waiting for. Amanda had no idea her party would be inside a Walmart store. We arrived and I told her we would quickly go inside to get some last minute party decorations. Finally, we followed Adriana to a beautiful space where all her guests and Walmart’s mascot, Sparky, were waiting for her with this really nice surprise. Amanda was in shock, she could not believe what was right in front of her. Without a doubt, she enjoyed every single detail about her party. Slowly she began grasping reality and played with her friends as well as Sparky. Walmart offered a gift card to each guest to use it in anything they desired, and take advantage of the new electronic system, “Scan & Go”, introduced by Walmart. They could scan the toys they wanted, see their prices, and then proceed to the cashier, where the purchasing process was almost complete. The children also received miniature Walmart shopping carts, and Sparky toys, as well as took part in decorating cookies, eating pizza, and breaking the Sparky piñata! This was truly a perfect birthday, far exceeding all of our expectations.

This was how Amanda’s dream came true thanks to Walmart. They truly made us feel like we were part of the Walmart Family.